Background: Alzheimer’s disease (AD) is a deteriorating neurodegenerative non-curable disease that affects millions worldwide. Current drugs have side effects that are significant. In AD, the betaamyloid precursor protein (β-APP), critical for normal neuron growth, survival and repair, is improperly cleaved by specific aspartic proteases creating fragments that form amyloid beta. These fragments aggregate outside neurons and create plaques which lead to destruction of neural signaling. The pathophysiology of AD is complex and there are many approaches to combating the disease. Many studies target PTB domain-containing proteins in order to inhibit binding to β-APP to prevent amyloid formation; whereas others target inhibition of specific aspartate proteases required for amyloid plaque formation. The role of GSK-3 is actively being studied as well as specific inhibitors to this target for AD.

Methods: Initially a structural search was done in the Protein Data Bank (PDB) for all protein targets in the absence and presence of inhibitors and regulating molecules involved in AD. The structural criteria of the crystallographic data for this review of proteins associated with AD are the following: 1) A resolution of 3.0 angstroms or higher; 2) 3.5% redundancy in data; 3) Greater than 85% completeness; 4) Rfactor less than 24%; 5) Rfree below 28% and within 3% of Rfactor ; 6) 100% occupancy of inhibitor or regulator (if present). In addition, preliminary characterization (sizing) of nanoparticles with fluorescent spectroscopy and dynamic light scattering is reported. Results: Structural examples analyzed include Presenilin Homologue (PSH) protein and Mint1 which are important for the regulation of β-APP. Mint1 and Presenilin are examples analyzed of the phosphotyrosine- binding (PTB) domain. Recent studies of the inhibition of the aspartic protease BACE1 that is known to cleave β-APP to β-amyloid essential to forming β-amyloid plaques is reviewed. A structural analysis of BACE1/inhibitor complexes is provided with suggested modifications to increase bioavailability of inhibitors. Finally, a novel technique utilizing nanoparticles to destroy β-amyloid plaques is introduced as a possible future therapy for AD. Preliminary characterization and analysis of nanoparticle sizes to deliver GSK-3 inhibitors is presented. Conclusion: These structure-based examples discussed confirm a high level of complexity involved in regulating β-APP that presents a formidable challenge as a target for drug development to block β- amyloid plaque formation (β-APP cleavage) in AD. A more direct approach to combat AD is the inhibition of the aspartic protease BACE1. In addition the role of GSK-3 in AD introduces a new level of complexity in the pathophysiology of AD. Taken together, the current focus of many studies is now on drug delivery to these known targets via nanoparticles and microspheres. 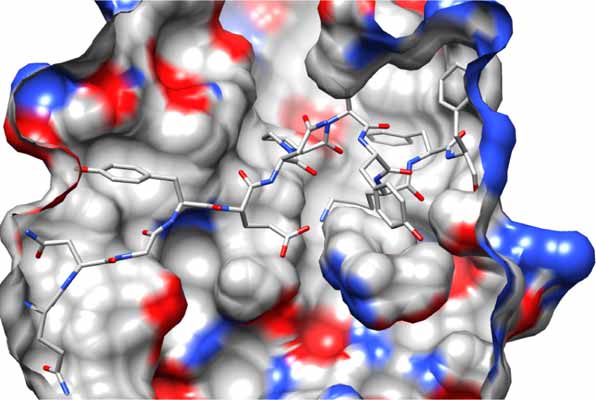