Background: Paracetamol (p-aminophenol) and salicylates are nonsteroidal antiinflammatory drugs that are widely used in the general population. The adverse effects of both drugs continue to be a focus of the pharmaceutical industry in the development of new molecules that will increase treatment safety. In this context, we tested nine compounds derived from paracetamol and salicylates, synthesized in our laboratory, for their safety and ex vivo and in vivo anti-inflammatory activity.

Methods: We analyzed the cytotoxicity of the compounds in ex vivo mice neutrophils, and their ability to inhibit the production of pro-inflammatory mediators (nitric oxide and interleukin-6) after stimulating with LPS. Next, in the selected molecules, we evaluated the anti-inflammatory effect on an in vivo inflammatory model of acute lung injury in mice. All nine compounds were also submitted to the cytotoxicity assay, like the original compounds.

Results: None of the compounds showed cytotoxicity under the cells used. However, of the initial compounds, only five demonstrated anti-inflammatory effect, inhibiting Nitric Oxide (NO) and interleukin 6 (IL-6) production by neutrophils stimulated with Lipopolysaccharide (LPS). After this initial trial, four modified compounds were able to reduce leukocyte migration and fluid leakage in the bronchoalveolar lavage of mice. However, only the compound 5a1, derived from the esterification of gentisic acid, was able to significantly inhibit the levels of all pro-inflammatory cytokines and increase the levels of antiinflammatory cytokines evaluated.

Conclusion: In conclusion, all compounds showed a good safety profile, and many of them had an antiinflammatory effect. However, the compound derived from gentisic acid is highlighted for its significant effects ex vivo and in vivo and in this context, we believe that this compound is a potential candidate for the development of a new anti-inflammatory drug. 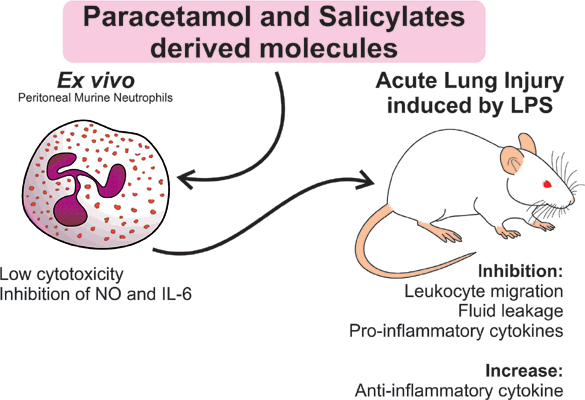