Background: Formulations containing two or more than two herbs are called polyherbal formulation. Single herb formulation has been well established due to its active phytoconstituents, which are usually present in minute amount and sometimes these are insufficient to achieve the desired therapeutic effects. The popularity of polyherbal formulation is due to its high effectiveness in a vast number of diseases.

Methods: In this study, poly-herbal formulations were prepared by using different solvent extracts with the help of the hot extraction process through Soxhlet apparatus. The poly-herbal formulations were prepared by using traditional herbal plants namely, Bacopa monereri (BM), Embelica officinalis (EO), Mucuna pruriens (MP), & Withania somnifera (WS). Different combinations of PHFs (PHF1-5) were prepared by using the extracts in different ratios. The prepared PHFs were optimized for antioxidant potential by the DPPH assay. Eighteen Swiss albino mice (30-50 g) were grouped into Control, MPTP(1-methyl-4-phenyl-1,2,3,6-tetrahydropyridine) and MPTP+PHF1 (6 mice in each group). Experimental mice were given PHF1 (50 mg/kg body weight by intraperitoneal route). MPTP(1-methyl 4- phenyl 1,2,3,6-tetrahydropyridine) treatment was given orally for 2 weeks with prior use of 20 mg/kg body weight for 2 weeks.

Results: After the treatment period, neurobehavioral study and evaluation of neuroprotective effects were done according to biochemical parameters.

Conclusion: The result concluded that PHF1 enhanced the dopaminic neurons in the substantia nigra region of the brain. Hence, this poly-herbal formulation gives a better and novel treatment base for future drug discoveries in the case of Parkinson’s Disease (PD). 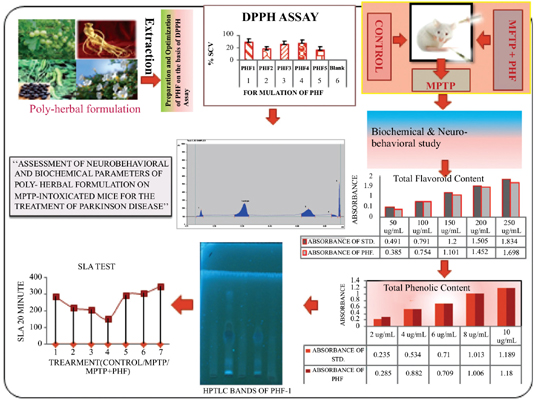